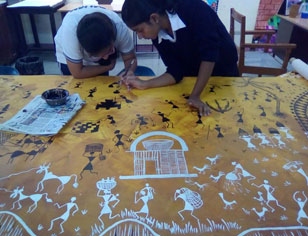 We at Daly College believe that there is hardly a family which has not been affected by cancer. Some say it’s genetic, others attribute the cause to tobacco abuse and other such habits. Be that as it may, we as a community, are concerned with Awareness, Prevention and Treatment. We would also like to offer time and affection to those who are without hope & without emotional support. 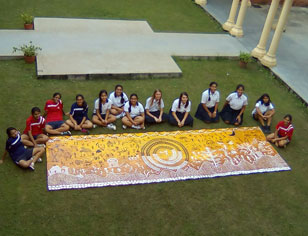 Students have participated in the survey which was about tobacco habits and identification of mouth cancer at an early stage. The survey was in the form of a questionnaire consisting of close ended questions.

They have also conducted computer classes for the staff and prepared a wall painting for the institute. The student committee decided to paint a huge canvas and present to the foundation, the color of which will fill the hearts of patients with positive energy and hope for life. The size of painting was 1.52 m x 5 m and it took about 20 days to complete. Students visiting the art room had contributed to the painting. They are actively involved in fund raising activities for the new centre being designed by “Fortis Healthcare Limited”, a chain of super specialty hospitals in India through us.

Students who are members of Friends of Indore Cancer Foundation had a brain storming session with Mr. Nitish Bharadwaj and Mrs. Yashoda Dharkar of Indore Cancer Foundation to decide on a short story which will be used to make a short film on Cancer awareness. The students submitted short stories out of which one has been selected. The short film will be in collaboration with the DC students who will help in the different aspects of making of the film. Student Committee