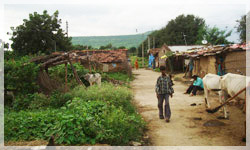 The basti or hamlet of 30 families close to the main road leading to Nemawar from the village Sanawadia was adopted by the enthusiastic students of the Daly College. A group of students developed the idea of helping this village by providing: sustainable lighting, wind generators and solar power for the community. The inhabitant families are bhil tribal who have moved to this area in search of casual labour in the fields of farmers of Sanawadia. It is a small village on the outskirts of Indore, 9 km away from The Daly College, surrounded by lush green hills and fields growing Maize and Jowar. 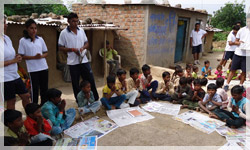 The 'basti' has recently been provided with a narrow cemented road, on both sides of which are temporary and poorly built houses with no proper sanitation and drinking water facilities.

In the month of December RSIS project at Sanawadia established a solar and wind hybrid electricity system of 1.9 kw for street lights. This brought light on the streets which were used by children to play and read who otherwise were dumped in the dark rooms after the sun set. 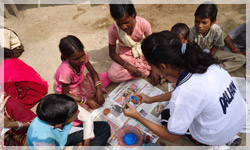 During the regular visits students realized unavailability of common place where they can interact with children and expose them to creative drawing, painting, art & craft. So a new idea flashed that the basti needs a community hall. The Dalians made an earnest effort to raise funds for the Community Hall through - Casual day, traditional day, student dance, Fete, Brochure with advertisements. Children full of emotions of love and service contributed wholeheartedly in the making of the building brick by brick. Seeing the good work and the enthusiasm of the students the local administration came forward and funded the project in a great way. 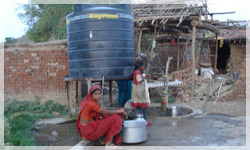 Their regular visits saw an increase in the participation of the locals. They became role models as the locals started making efforts in keeping their surroundings clean. Creating awareness amongst the children about body cleanliness has seen them imbibe these ways in their daily lives. The weekends were special for those basti children as it brought fun, friendship, joy and love. They played, danced and sang songs. 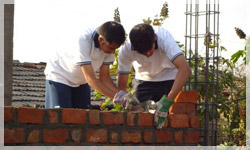 Now it was the turn of the Green Club of the Daly College. To improve the supply and availability of good quality water for the everyday use of a marginalised rural community in this water-scarce region of Central India and rectifying problems with usage. Need to creating awareness about judicious use of water resources. The annual rainfall of Indore is 96.5cm which is received during June to September .The village suffers from acute water shortage in the summer months and erratic supply through the year. Lack of adequate filtration and treatment systems, makes the water unfit for use. 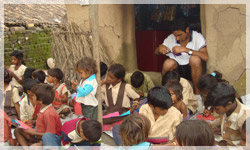 The student community decided to take this as a project of Water Management at this hamlet which was discussed at Global Alliance of Leading Edge School at "Tilt Shift : Experiments to Change the World" at Raffles Institution, Singapore in June 2011. The project was greatly appreciated and partly funded by the patrons of Tilt Shift. The local administration after seeing the enthusiasm and work of students has decided to fund the project. 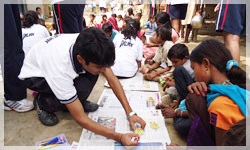 The students conducted Initial survey of topography soil, annual rain fall, level of ground water, water quality and quantity in Sanawadia. Now the students will be constructing water catchment lake by diverting the water from the nearby hill. This will ensure availability of water throughout the year. For daily usage a new water tank will be provided and better water filtration technique will be adopted. Beside this the plantation will improve the water holding capacity of the lake. This is just a beginning and an attempt in a small way to make a difference in the life of the 30 families.