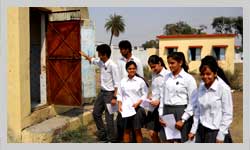 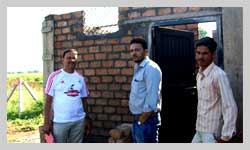 L’Ermitage School, lead by the mercurial Christopher Hunter and Pascal Bouquillard, who had vast experience in setting up Eye Camp projects involving secondary students in France and Mumbai. Chris brought along, the knowledge of delivering optometric services to the impoverished schools of Mumbai. 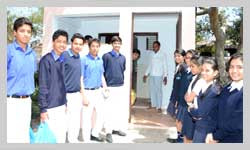 The aim of the Camp, was screening the potentially large number of patients, from slums  providing ‘free’ spectacles and delivery of correction glasses. 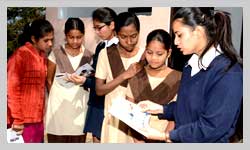 A group of twelve students, belonging to Year Ten, rose to the challenge and responded admirably to a crash-course in Optics, Optometric and hands-on training session in handling sophisticated optical equipments like the Auto-refractometer, Lensometer and Retinoscope. A workshop was held for the team of students in which their Physics Teacher, , demystified the basic concepts of the Eye, common eye defects and their optical corrections while, the Optometrist unravelled the principles and techniques of Optometric analysis of the Human Eye. 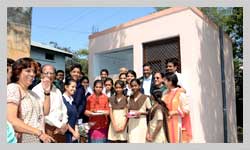 Armed with loads of chutzpah and derring-do, but very little in terms of real experience, the young team of DC students went about the job with commendable professionalism. The team worked out a comprehensive strategy of promoting the Eye Camp. The team scripted and designed its own flyers and pamphlets to be distributed to the residents of Shiv Nagar and adjoining slums.

Success is nothing, excellence is something, but serving mankind is everything

This maxim may seem to be a utopia but when examined at a higher level, it is very pragmatic. A man can make his life meaningful only through serving others. A highly successful entrepreneur cannot always live a gratified life nor can a man with ample wealth. It is only that man who lives for others and is driven by altruism who derives maximum gratification from life.

The Daly-Ermitage joint eye camp 2010, an endeavour which changed the lives of many, was such a step taken by a small group to make a difference. Having celebrated the third birthday this year the eye camp has proven to be an apotheosis in the field of social service. The camp was organised from 22nd to 23rd February in Tilore Khurd.The camp was a joint venture of The Daly College,L' Ermitage school and Choithram Netralaya. And the team consisted of 14 Dalians, 3 teachers, 24 French volunteers, 3 optometrists and the support staff who all cooperated to make the eye camp a memorable one. When the team had been constituted, a blueprint of the structure of the camp was outlined which included basic understanding of concepts involved in eye care, the campaigning strategy, assignment of duties to the volunteers, arrangement of various amenities at the camp site and various other things.

After this the team visited the camp site, the Public Health Centre of Tillore Khurd a deliberated with the officials and villagers for their approbation of our endeavour. Having familiarised ourselves with the people we had to work with, we talked with the villagers about their problems and spread the word to create and ambience of awareness. That day we developed a rapport with the villagers and decided to prepare an apposite campaigning strategy which in all senses had to be very animated and convincing. We worked out a plan which consisted of distributing pamphlets, going into the localities and talking to people, spreading the word through a mike. We executed the strategy fastidiously and with full exuberance. During this phase of the camp, we all had enriching experiences ranging from meeting a variety of people to walking in the afternoon sun till our throats were dry to the root. We had an opportunity to sharpen out diplomatic skills.

Finally the day to actuate the camp arrived, the day we had been waiting for. We all were ready like soldiers to meet the challenges laid ahead of us. With unparalleled enthusiasm we worked to give our best. From the registration counter to the spectacles distribution counter, from the beginning to the end, each and every volunteer worked diligently. For all the four days our sole focus was to serve those who came at our door

Every day after the camp got over, the entire team deliberated on the day's work and performance and shared our experiences.

The aim of the camp alongside service was also to prepare students for the future through enhancing their managerial and leadership virtues. This was facilitated by the problems we confronted during the camp. The camp's success can be attributed to the power of the dreams of those who participated. Crowd management had been a problem from the start but it didn't prove to be a hurdle due to the innovative model prepared by the students and teachers. There had been problem of inaccessibility to certain areas and this was the most severe one. The most original and novel idea that came up was that of a mobile unit which comprised of a team of 6 students, an optometrist and a teacher that moves around through various villages in a bus. These two problems though seemed to be very heavy were reduced to the size of a tiny particle and through this we learnt innovation. We learnt freedom, freedom of expressing ourselves and not being diffident and the freedom of taking risks and initiatives.

The camp went on with great alacrity for all four days. Even during the camp, campaigning was done in the nearby areas and the mobile unit was a huge breakthrough and it covered the entire village of Piwdai.The camp was visited by the Principal and other senior authorities of The Daly College and all appreciated the tedious efforts of the students and the teachers. The camp was also the centre of media attention too as it was the first of its kind in this area. The local authorities too were elated by the satisfaction the villagers derived from the camp. The camp was closed on 25th Feb. And till then we had done:-

The Daly-Ermitage-Choithram Joint Partnership Eye Camp was a very small effort to bring about change. What did we do was just the tip of the iceberg. So, our endeavour was also intended to encourage public-spirited citizens and provide them incentives to undertake such things in future too. The students too will look forward to such initiatives as they have learnt a lot from this. Their bonds of friendship have strengthened as they have learnt teamwork and cooperation. They had an opportunity of engaging in work with the people from different ethnic and cultural backgrounds.

19 students from 10 different countries  including India and represented by DC, another new project with an open mind, lots of vigour, and a sincere desire to do the very first and meaningful service work of building walls on the foundation of the community center in Baisoara, Romania. Baisoara, a village situated in the foothills of the Apuseni Mountains, lacks a location for young people to congregate. By building a community center, the very aim of building a nexus for cultural and social events, resulting in a greater sense of community building besides offering undaunting challenges and incredible learning to the entire crew was fulfilled

In addition to beautiful hiking, a visit to the Bear Caves, a Quiz Bowl with students from

Transylvania College, and an authentic Romanian wedding, the team eagerly went for the interior walls, preparing for the trek with shorter day hikes and some strenuous work mixing concrete and pouring a new foundation for a collapsed school wall. Celebrating with a feast at the Mayor of Baisoiara's home and his daughter’s marriage added a cultural hue to the project, followed with trek into the Retezat Mountains and cooking dinner on camp stoves left everyone with exploration as well as delirious laughter.

Tough decision making, team spirit, group dynamics through effective interpersonal skills, empathy and significance of using commonly accepted language for communication were few skills besides medical and physical tasks that the students of DC Ms. Sabiya Sheikh and Ritika Jhalani  faced up while staying in a  multicultural arena during the entire project.

Little children usually walking a few kilometres to go to school via the busy roads and facing a real hazard while crossing them, jobs like cattle rearing, constructions, and repair work in dry seasons while most of agricultural works happening during wet season reminds one of a simple and basic life style at Peru where food is mostly organic in nature and no wonder that many people survive here for 100 years!

The need for the kindergarten here arose when in a wet season a few years ago, a young boy drowned while walking thirty minutes to the nearest school. Obviously, such an event would have a major impact on the community, and it was an honour for us to be a part of something that so directly helps the community. The main aim was to build a room for a kindergarten in Yuncachimpa, a small village located in the outskirts of the Sacred Valley (55 km from Cusco) at around 3600 meters above sea level.

From the very beginning, this real community project bestowed Ipsita Suvarna and Siddarth Sarkar of The Daly College with a unique experience of being acquainted with the life in Yuncachimpa, their culture, their adorable farming families living on and off the environment through waste preservation, use of the community dynamics to lessen their environmental footprints, their ingenuity and adaptability to alter and adapt to solve a quandary and above all the art of giving.

As a result, the project gave more than just a kindergarten! Participants shared individual cultures, ways of life, knowledge and of course an ability to give advice and a new perspective on matters, which may not be considered by the community. This involvement also meant a sense of accomplishment much more than what was expected at first. Instead of the one classroom, the project ended up building three rooms. There are an estimated fifteen to twenty children who will study at the kindergarten that was built.